Recently I bought tickets to go to see the 80s bands the Thompson Twins, the B52’s and Boy George and Culture Club.  I usually buy the mid priced tickets and I make sure that I am in the middle of the seating at any level.  In the large arenas I never buy floor seats because even though I do not mind standing for an entire concert, my height restrains me from sometimes seeing everything because I know that the only 6 foot 10 person will end up in front of me.

My husband agreed to go to this concert with me and we were happy with our first level seats that we bought at a reasonable price.  We got to the Smart Financial Centre in Sugar Land Texas about 45 minutes early because I am always early and I do like to look around at what may be available in the lobby.  As we walked in to the lobby I saw that they had video games and I commented that they didn’t have those the last time that I was there for a concert.  My husband Steve said that he heard on the radio station that was promoting the concert that they said to stop by to play the 80’s video machines that they were bringing to the concert.  We got in the cue to play the games and they also had a raffle to win front row tickets for that night’s show.  I signed a ticket and Steve declined because I am the gambler/game player and he is the engineer in the family.  I signed the ticket with my name and phone number and because there was a wait to play any game I just went on to other offerings in the lobby.  I named an 80’s song and won a new sweat towel for my car so I was happy.

We went to our seats and they were in the 200 section directly viewing the middle of the stage down below.  I commented to Steve that I needed to keep checking my phone because I knew I was going to win the front row tickets.  Steve rolled his eyes at my comment and he decided to go to get us a popcorn and a drink.  He returned and that was when my whole concert experience changed.  I received a text saying that I had won the front row tickets and that I needed to return to the video game site in 5 minutes to receive my tickets.  I jumped up and ran.  I ran and flew down those 4 flights of carpeted stairs faster than any one has ever descended there.  I got to the girl who had the tickets and she asked for my blue ticket that was the mate to the ticket that I had signed.  For a second I was worried that maybe that matching ticket had disappeared when I had visited the restroom but as I looked in my pocket there it was.  My blue lucky ticket matched and we were given two front row seats.

We missed part of the Thompson Twins set but as the B52’s came on I stood up and never sat down for the entire concert to come.  The B52’s were colorful and just fun to listen to.  A girl down from me was also standing and enjoying the music while those around her where not.  I glanced at her and she felt like she should also sit and I nodded to her to keep enjoying our front row experience.  I know most of the B52’s songs and even those that I did not know I still stood and enjoyed.  After the B52’s were finished, a band roadie offered me the set list and I accepted it gladly.  Another lady just took one and was chased down by a worker.  I was given mine.  Do not just grab what not is yours.

Between sets the lights in the arena would go on and there would be a 15 minute break.  I could not wait until Boy George came on.  The lights went down and here came Boy George.  Let me tell you, his out fit was great, it was a loose fitting black jacket with matching black pants.  His signature hat had a band surrounded by white buttons the size of half dollars, and his shirt had writing on it that gave the vegan fans something to love.  Boy George has beautiful blue eyes and he had makeup and a jewel as part of his face makeup that makes him thee Boy George.

I noticed during all of the sections of the concert that even though we were in the front row of the concert and could see virtually everything up close people still had their phones out the entire time.  Yes, I took pictures but I took a couple and then my phone was in my pocket so that I could enjoy the moment.  Boy George was maybe on his 6th song and he remarked that he was no too hip with technology and then he headed my way and pointed to me and remarked how I was thoroughly just enjoying the show.  At this time he came right to me and I went towards the edge of the stage and I grabbed his hand that he offered.  He asked me my name, I said Kim and he remarked that he liked my blue shirt.  Yes it matched my blue lucky ticket!  He held onto my hand I turned around with the spotlight on me and waved to my new fans.;)

At the end of their set we all applauded and the band and Boy George exited.  I could see the set list so I knew that there were 3 more songs ending with Karma Chameleon.  Boy George came back on and announced that the next song was one that we probably did not know but that he enjoyed singing.  Then he dedicated that song………to me!!!  “This song is for Kim in blue!”  He laughed and then sang Give Me Life.  He finished the set with Karma and thanked Houston for being a great crowd.

The rest of the band left the stage and the drummer came my way.  I motioned if I could have their set list and he gave me that.  I always wear more than one bracelet so I took one off and gave it to him and asked him to give it to Boy George and tell him that Kim loved the concert.  He said, “Of course I will give it to Boy!”

I was exhausted as I left with all of my set lists but it was the best concert in the front row ever.  Oh we also got a guitar pick that we thought went over our heads.  When the lights went on there was the pick laying there for me to pick up.

Best Concert Ever.  The front row experience will now make me think about what tickets I choose especially if it is for an act in which I know every song.  It would be worth it! 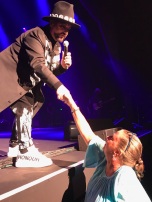 Teacher by trade, funny person by fault. I find almost everything funny, so smile. I love to read, bike, playing tennis and to beat anyone at any game. I love movies, love to enjoy good food and love being with people who also enjoy the world. View all posts by kbolt24